A new research has concludes that financial hardships can accelerate aging.

The research which examines the effects of financial difficulties on aging shows that adults who spend as few as 4 years in economic hardship could be at risk of accelerated aging in comparison with adults who do not experience periods of poverty.

The term accelerated aging describes people who are physically less capable at an earlier age than others at the same life stage. These people may also have poorer cognitive function and higher levels of inflammatory markers in their blood.

Scientists associate high detection of markers of inflammation, such as C-reactive protein (CRP) and IL-6, with many conditions, including infection and cancer.

As such, researchers from the Department of Public Health at the University of Copenhagen in Denmark conducted a study to investigate whether late-middle-aged adults are adversely affected by economic hardship compared with adults of the same age who are not experiencing financial problems.

Results appear in the European Journal of Ageing. 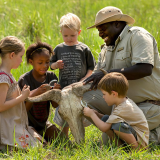